What: Develop, provide funding and construct a Shaded Fuel Break to protect the interface of public/private land along the Stanislaus National Forest boundary north of the North Fork Tuolumne River and south of the South Fork Stanislaus River. 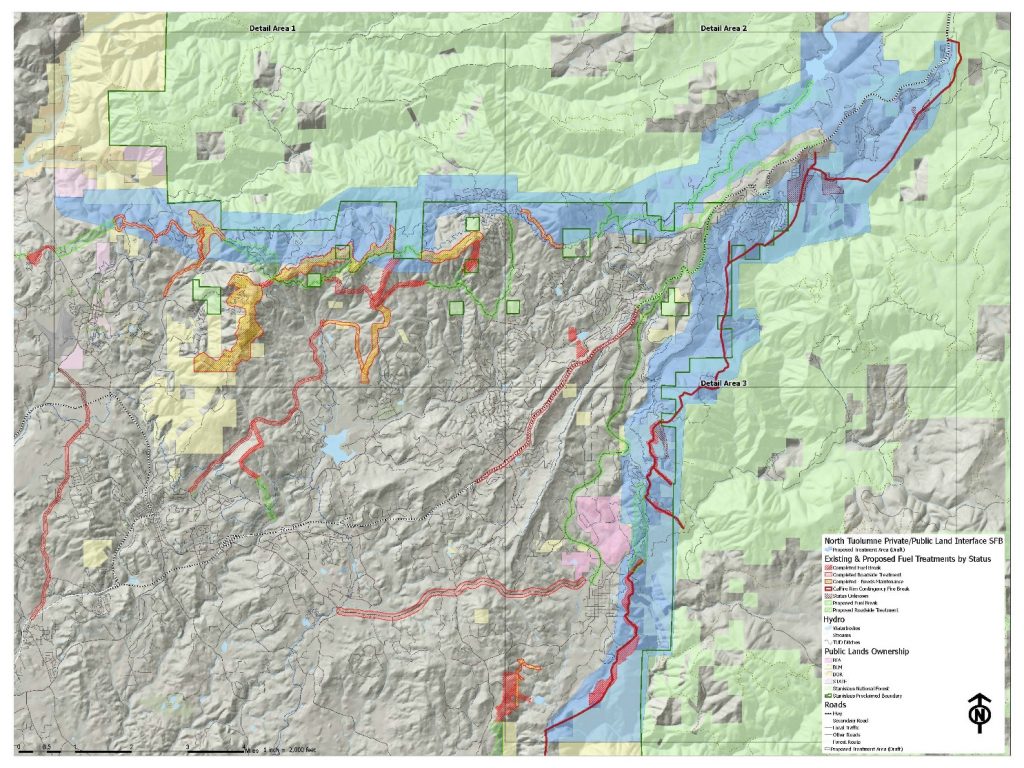 Where:  The length of the Shaded Fuel Break (SFB) is estimated at 27 miles and approximately 17,000 acres. Acreage is approximately 50% public (NF & BLM) and 50% private land. The width of the planned fuel break is proposed to be approximately 5000 feet and will vary with the terrain. This proposal outlines the process and costs of completing the private land portion of the project.

Why:  To provide for protection of wildfires originating on public lands along the interface of private and public lands in northern Tuolumne County and an additional measure of fire protection from a wind driven fire event similar to the Camp Fire which destroyed the town of Paradise California. This extremely destructive type of fire is driven by north and eastern winds often exceeding 75 miles per hour developed by unusually high pressure system to the north and east and low pressure to the south and west of California, normally occurring in the late fall prior to the onset of normal late season precipitation.

The catastrophic results of this type of event would threaten many lives, decimate the northern portion of Tuolumne Counties homes and infrastructure as well as the vegetation and scenic beauty.

The absence of a normal fire regime and the change in weather conditions extending the fire season in the western US have brought about an increase in size and severity of wildland fires. The absence of small fires which reoccurred on a 7 to 10-year basis over most of the Westside Sierra Nevada for thousands of years due to lightning and burning by Native Americans and early ranchers have produced an overabundance of forest and brush land fuels. This fuel loading and dry conditions create fires which burn hotter and more erratic and with high winds move much faster. To make matters worse, when winds approach and exceed 75 mph aerial retardant is no longer available as it is too dangerous for planes and helicopters to fly.

The proposed width of the SFB (5,000’ +or-) is designed to allow additional safety for fire initial attack when severe wind conditions create a firestorm of tremendous heat and throwing embers at distances up to a mile or more. This will allow the reduced fuel loading within the SFB to starve the fire front of energy and bring down the flame length and canopy fire to a ground fire. This allows an additional safety factor and more options for attack on the fire while more attention can be spent on the expected spot fires.

Fire-fighting options include back fire, better control of advancing spot fires and a safety zone for personnel and equipment staging.
Once completed, the SFB will not only serve as protection against wildfires but may provide additional time for a more orderly evacuation in the case of extreme wind-blown fires.

Another benefit of a functional SFB is that it will also provide a safe zone for reintroduction of prescribed burning to expand and maintain the zone of fire protection at a much lower cost.

How:  Raise up to $25,000,000 by local and extended fund raising efforts and competing for State and Federal Grants.
Utilize start-up funding for environmental compliance (State and Federal) and planning and layout of project and project administrative costs.
Cost offset by utilizing the value of forest products (commercial timber and biomass) removed within the SFB to subsidize the total project cost estimated to be $51,000,000 for both private and public lands. An option to minimize the concerns on the size/cost of the planned 1 by 27 mile size would be to phase the project based on funds available.

Phase 1:  Funding and Budget of $30,000 – $60,000 for a number of 300×500 foot demonstration shaded fuel break (SFB) in areas with ROE’s readily accessible to public on or near the boundary of National Forest or Bureau of Land Management.  (300×500’ is approximately 3.5 acres)  The cost would be about $5,000 to $15,000 each, depending on vegetation/trees and topography.
These demonstration areas would be designed to get public and agency buy-in for project.

Phase 2:  Funding and budget of $1-6 million – Phase 1 plus Plan, locate, obtain ROE’s and do CEQA for 300-500’ SFB on 27-mile length of boundary on logical and approved portions of private land.  Estimated 1,630 acres. Objective would be to provide a standard width Shaded Fuel Break for minimum protection to the private/public land interface and adjoining communities and a place where future prescribed burning could be initiated by FS or BLM on adjacent public land for additional widening as funding and environmental approvals permitted.

Phase 3:  Funding and budget of $6-23 million – Phase 1&2 plus complete remaining SFB on the private 27 miles of land as funding and approvals permit. Estimated 6,550 acres.

Phase 4:  Funding and budget every 3-5 years approximately $8,000,000 to maintain the 8,000 acres of completed SFB on the private land portion. Costs may be reduced greatly with the potential option of prescribed burning.