This article was originally published on The Union Democrat.  To read the original story click here. 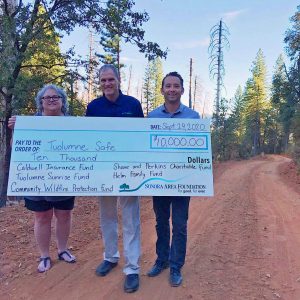 (From left) Melinda Fleming, executive director of the Tuolumne County Alliance for Resources and Environment; Darrell Slocum, executive director of the Sonora Area Foundation; and Tuolumne County Supervisor Anaiah Kirk, co-founder of the nonprofit organization Tuolumne Safe, stand on Mount Provo Road present a check for $10,000 from the SAF Community Recovery Fund to help pay for improvements to the road that serves as an evacuation route for residents of Ponderosa Hills.

A project to upgrade Mount Provo Road to create an emergency evacuation route for hundreds of Ponderosa Hills residents is now fully funded, according to Tuolumne Safe, a newly created nonprofit organization that’s behind the project.

A project to upgrade Mount Provo Road to create an emergency evacuation route for hundreds of Ponderosa Hills residents is now fully funded, according to Tuolumne Safe, a newly created nonprofit organization that’s behind the project.

The funding comes from donors who pledged more than $14,000 for transportation, compacting and grading of $11,500 worth of road rock donated by Blue Mountain Minerals, a news release said.
Final work on the project is expected to be finished before the end of October 2020.

Donors who contributed to the project include Sonora Area Foundation’s Community Recovery Fund, which awarded a $10,000 grant made possible with other funds held by Sonora Area Foundation, including the TuCARE Community Wildfire Protection Fund, Tuolumne Sunrise Fund, Shane & Perkins Charitable Fund, Helm Family Fund, and Caldwell Insurance Community Fund.
Donations from Tuolumne County businesses include $1,500 from Coleman & Horowitt, LLP Attorneys At Law; $1,000 from Healy Homes, Inc.; and $500 each from The Law Offices of
Nathan Nutting and MGK Visions, Inc.

More than 800 people and 330 homes are in Ponderosa Hills, which has experienced a handful of fires in the area since the 1970s.
The last major blaze in watersheds around Ponderosa Hills may have been back in the 1940s or 1950s, said Anaiah Kirk, the District 3 supervisor for Tuolumne County, who is one of seven directors for the Tuolumne Safe nonprofit.

Tuolumne Safe is a 501(c)3, meaning it’s approved by the Internal Revenue Service as a tax-exempt, charitable organization.